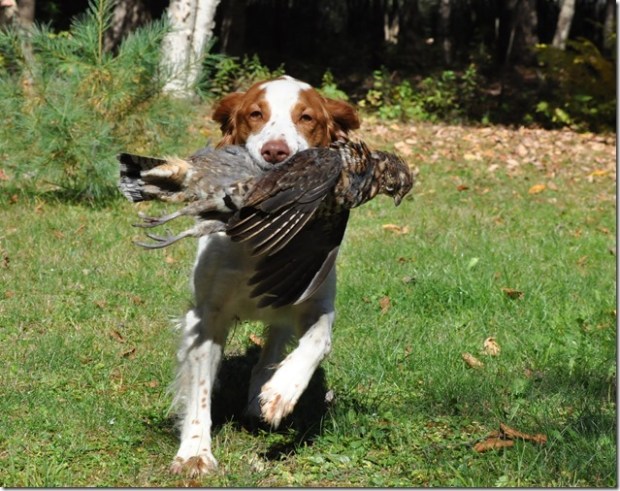 It all happens at once in October – the best upland hunting, water fowling and wild turkey season.  There’s no way to get it all in.

And since a successful fall turkey hunt depends heavily on pre -scouting flocks and patterning their daily routine, the extra scouting time needed really puts a dent in my  upland hunting.

Or it used to, until I discovered that my bird dog ( pictured above retrieving a ruffed grouse)  is an excellent wild turkey scout. On more than a few occasions the dog or I have flushed a wild  turkey that was hunkered down in tall weeds. They flushed like twenty pound grouse. In every case they were single toms with long beards hanging off their chest.  It seems a long beard tom will hunker down and hide like a grouse or woodcock in hopes that the trouble maker will pass by without detecting them and only flush to the air at the last second when it gets to close for comfort.

Flocks of hens with poults usually move out of danger before it gets that close but when the dog does put them on the run, I sometimes get a glimpse of them.

I don’t shoot a flushing turkey while grouse hunting with the dog because the season isn’t open yet and I’m usually loaded with light 7 .5 shot.  But the point is, the dog shows me the whereabouts of some turkeys I may never have seen without her.

I run the dog for grouse and woodcock in my suspected turkey covers in the weeks prior to the fall turkey opener and I make note of all the tracks, feathers, droppings, scratching and roosts I see while grouse hunting so I‘ll know where to go when the season opens.  Then I leave the area alone for a week before the season opens.

Of course I thought about using her as a turkey dog to find and scatter flocks for me to call back as they try to regroup.  But she’s a high energy Brittany Spaniel, born and bred to stay on the move and cover a lot of ground in search of game.  To keep her still beside me while trying to call in a turkey would be cruel and unusual punishment for her. It might work in her declining years, but for now she’ll be a wild turkey scout.

So, I found a way to combine upland bird hunting and scouting for wild turkey. Now, if only I could figure out how to get some duck hunting in the mix.