Stress flows out ones finger tips while petting a dog. That’s nothing new to bird dog owners but now, the rest of the world is onto to this. Therapy dogs visit rehab centres and seniors homes because health care workers know that canine companionship has therapeutic benefits like lowering blood pressure, reducing stress and raising spirits among the sick or traumatized.

The other secret health tip, known to bird hunters for ages, but recently getting popular with non- hunters is Eco Therapy. That’s the official term for messing around in the woods. The gist of it is that we humans are hardwired to interact with nature and being alienated from nature increases our stress and anxiety but being involved with the natural world mellows us out. So, I began wondering, what if I had my own therapy dog to mess around with in the great outdoors? The combination of Eco Therapy with a therapy dog would de-stress me to the level of a sloth on Prozac.

That was the theory that led us to a highly recommended breeder and trainer of bird dogs. He had a litter of Brittanys from good hunting stock and it was time to pick our little pointing dog. My wife and I sat on the floor facing each other making a little corral with our legs as the pups were brought out one at a time to play on the floor between us. They all sniffed our hands and licked our fingers. Some went to sleep and others chased the grouse wing on a string I had brought along. One bold little pup scrambled over my leg and raced around the room exploring new territory. I thought to myself, now this is a dog with a strong “what’s over there?” trait. This dog will get out there and hunt. It’s easier to hold back an on fire hunting dog than to fire up a dullard. So I said. “She’s the one for me.”

We gave her a solid name, Sadie, and a solid foundation of love and by March when she was six months old I was training her to quarter for the gun with a hundred foot check cord. Since we live near grouse woods and ruffed grouse don’t hold long for a pointer I wanted her to hunt close to me. Sadie lived up to the tendency she showed on the day we picked her and liked to run big. But on a hundred foot check cord she was learning to turn with me and hunt close. Now check cords are wonderful training aids in open fields, but I thought I’d take her to the woods so she’d know the rules applied there to.

A bird dog on a check cord in the brush is means tangles. She ran through every thicket and under every blow down, which is just what a good bird dog should do. But I couldn’t get through those places without losing an eye so I became adept at dropping the check cord on the ground and running around the thicket to pick it up on the other side as Sadie pulled it through. On this particular day in March the knee deep snow had a crust which supported her weight but not mine. It was easy going for her and heavy slogging for me.

I allowed her to enter a thicket believing I could drop the rope and grab it around the other side but the deep snow slowed me down just enough so I missed by inches when I lunged at the disappearing rope. Sadie wasn’t reliable to my call back whistle yet, especially in the woods filled with new scents to check out and especially since she had such easy running after a winter of mushing through deep snow. I whistled till my lips were chapped and she ran over the hill and out of sight dragging the check cord.

The bush was thousands of acres and I had no chance of catching up to her. Her paws didn’t leave a mark on the newly crusted snow. There were, however, plenty of old wolf tracks. I thought of her check cord eventually getting tangled on something and tethering her for the closest predator. She wouldn’t last long in hungry March. I climbed over one hill and to the top of the next then stopped to rest and listen. My heart was pounding hard enough to crack a rib. When my rasping breath slowed, I heard her yelping and slogged forward toward the sound.

A hundred yards further I saw her sitting on the snow yelping and whimpering. Her cord was tangled in a fallen tree she’d run under. She looked so helpless my first impulse was to run the last hundred yards to her. She was safe now but she hadn’t seen me yet and still believed she was lost and alone. Becoming lost and afraid is a good way for a pup to learn not to run off, so I hid behind a tree to wait for her lesson to sink in.

While waiting, my blood pressure came down from dangerous spike territory. My stress level fell from full blown panic to dead calm and my spirits lifted. Wow! This therapy dog idea was really working out. 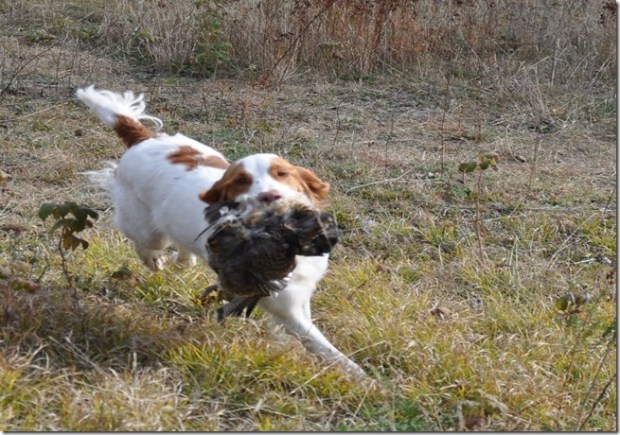 Sadie all grown up retrieving a ruffed grouse