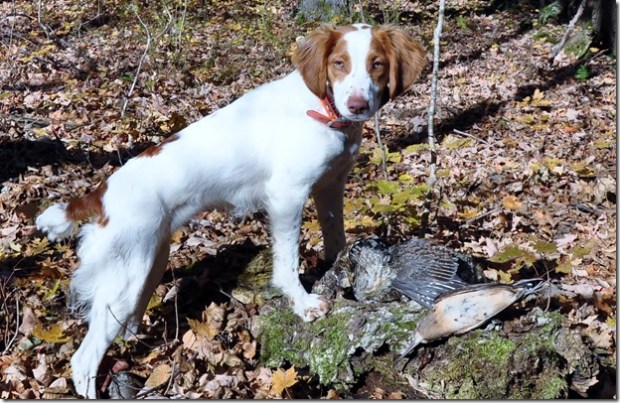 These days I hunt ruffed grouse and woodcock with my bird dog pictured here as a pup.  I love the dog work- watching her hunt, then get birdy and lock up on point while I walk in to flush out the bird. But there was a time I didn’t have a dog or even know where to find a grouse.  This hunt is from that time years ago.

My hands were nearly trembling as I zippered my vest and dumped a handful of shells into my pocket. It wasn’t from the chill in the air. I could scarcely believe my good fortune. It was my first season in the grouse woods. I was greener than grass,  still anticipating my first success on the feathered rockets we call ruffed grouse and here I was about to enter the brush with a wizened old pro. I knew that a serious grouse hunter would rather share a tooth brush with me than a treasured grouse cover and yet here I was about to enter such a place.

The gnarled fingers of the master poked two slim shells into his old twenty gauge side by side. I pulled my twelve gauge pump action from it’s case. He jutted his chin toward the tangled edge of brush running south from our position along the edge of an overgrown pasture.

“ Sun’s been shinin’ there a few hours warmin’ things up. Ol’ Ruff likes that when it’s frosty,” he said. We stepped off walking side by side about ten feet apart. Within two hundred yards I no longer felt the chill and the sun was bringing a little sweat to my brow. My tutor stopped and stared ahead silently. I saw nothing. I figured I might as well unzip my vest to prevent over heating. As soon as I touched my hand to the zipper a bird lifted off to our left with thunderous wing beats crashing it’s way upward out of a dense tangle. The old guy had his gun up smartly and  fired both barrels before I  mounted the gun to my shoulder. The bird crossed in front of us heading for the thicker cover to our right . I was puzzled that it could still fly after being shot twice by an expert and expected it to drop dead any minute.

“It’d be okay to shoot any time,” he said. I threw my gun up and let loose as the bird disappeared behind a spruce tree.

The echo of my shot had barely cleared when he calmly stated, “On the first shot, the sun was blindin’ me. On the second shot, that devil bird turned on a dime just when I pulled the trigger.” He looked at me expectantly. My heart was still aflutter. What was he looking at me for? Finally he said, “Well, How’d you come to miss?”

I didn’t know why I had missed. There were a lot of reasons. I wasn’t ready . I thought he had hit it. I shot too late. They all sounded like lame excuses. An expert like him wouldn’t accept them. I blurted, ”I don’t know.”

He shook his head back and forth slowly and sadly then put two fresh shells in his gun. I felt pathetic. He snapped his gun shut and said, “Son, if your goin’ to last in this game you’ll need to develop some speed. It’s a game of instant reaction. Otherwise these birds’ll drive you outa the woods.” I nodded agreement confident this gem of truth would help me bag the next bush chicken we flushed.

We pushed brush for half an hour then ducked under some low branches at the perimeter of an old orchard. Ten steps in and a large, grey phase grouse lifted off from behind the trunk of a tree on my right. My partner didn’t have a shot because I was between him and the grouse. I was on it quickly. “Develop some speed”, he had said. The muzzle caught up to the target, passed through it and was just pulling ahead when the barrel struck a tree branch and deflected down. Boom. The shot was low and behind. I stepped back, pumped another shell into the chamber, focused hard on the bird and continued to swing. The sight picture looked right. Boom! Four feet in front of the gun, the top half of a sapling jumped up in the air. It was severed cleanly from the bottom part of the tree by the full charge of number six pellets. I stood , mouth agape, staring at the severed tree while the big grouse escaped. The tree was one and a half inches in diameter and it had absorbed the entire shot column.

Instantly I griped, “My barrel hit a branch just when I was about to pull the trigger. It knocked my shot low. Nobody could’ve made that shot!” My mind felt nimble, agile, quick. The excuses kept flowing. “Then this stupid tree jumped in front of my second shot. Did you see it jump right up in the air? Where did it come from? I never saw it!” I picked up the top half of the sapling and handed it to him. “Can you believe this?”

He took it from me and examined the splintered end. A hint of a smile showed at the corners of his mouth. “Son, I can’t believe how well you did. Those excuses came pouring out of you like a flood. That’s what I’ve been talking about; speed of reaction! Get those excuses out fast! Convince yourself that bird was yours if only this or if only that. Keep your confidence up. Otherwise, these birds’ll  beat you down to nothin’. There’s got to be a million ways to miss Ol’ Ruff, son. If you keep at it, you’ll see most of ‘em.”