The making of a bird dog is a four year process. 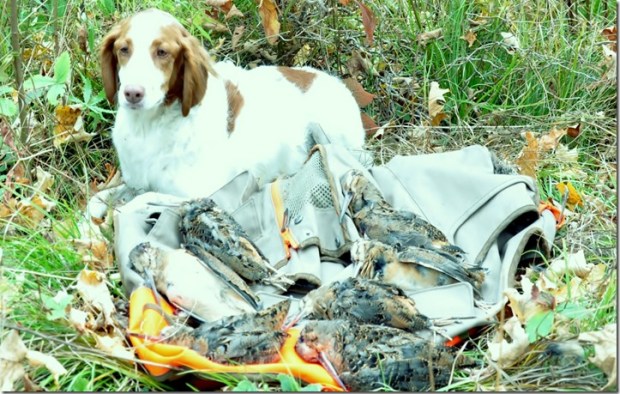 It starts with a little more than a handful of soft wiggling fur but within that fur ball is the genetic potential for a dynamite bird dog.

Pictured above is Sadie taking a break beside her score of woodcock.

It all came together on this October hunt. We got into a flight of woodcock where she pointed 20 times. The cover was thick so many flushes didn’t allow a shot because the bird was never visible behind a screen of leaves or my gun barrel was tangled up in branches.  The rest of the shots were through sticks, limbs and leaves but I did manage to scratch down seven timberdoodles

Sadie didn’t lose her composer with all the bird scent around. Once when I sent her to fetch a downed woodcock, she locked up on point as she approached it.  I thought she was pointing the dead bird but when I walked over, a second woodcock flushed from near the fallen bird. I made that shot and she had another to retrieve.

On one retrieve, the bird was no where to be found where it had fallen. After keeping Sadie near me while I did a thorough search,  I finally  let Sadie tear off in search of another bird. She was out of sight in seconds but right back in a minute with the wing tipped bird that had run off. She buzzed by me doing Mach 1, flung it at my feet as if to say “Here it is dummy. Why didn’t you let me trail it in the first place.” Then she was off to find another.

Good timing on a flight of woodcock, good dog work and some so so shooting combined for a near limit of timberdoodles.  Sliced thin, quick fried, flambéed in bourbon and served on rye bread, they will make a fine appetiser for a wild game dinner.