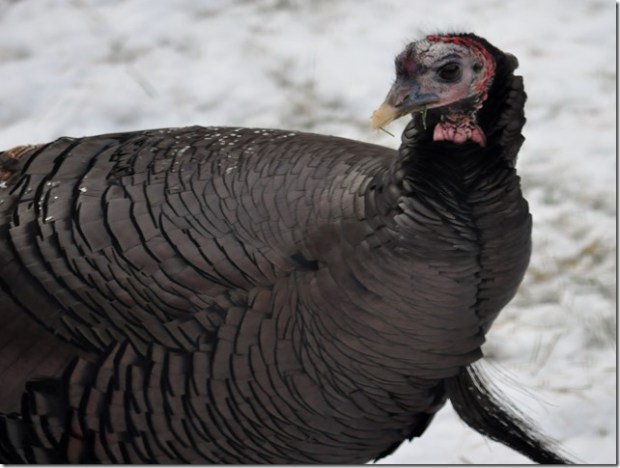 A wild turkey looks like massive bird and an easy shot when walking by at close range, but every season turkey hunters leave the woods with a hollow, sick feeling for missing or wounding a tom. They wonder how they missed a twenty pound bird with a shot gun spraying up to two ounces of pellets. There’s the problem – modern turkey guns, chokes and shells don’t spray pellets. They throw a small, dense pattern. And a turkey’s kill zone, its spine and brain, is tiny – the size of a grape sitting on a pencil. Because you are shooting a tight swarm of pellets at tiny target, you need to think of you shotgun as a turkey rifle and sight it in like a rifle. That tight pattern is only an advantage if you can hit what you’re aiming at.

The purpose of sighting in a shotgun is to verify that it hits where it’s aimed. I have owned four shot guns and two of them shot wide of my point of aim. I’m sure there are many more wonky shooting smoothbores out there. My first shotgun, decades ago when I was a novice, hit twenty inches to the right of my aim point at twenty yards. I wasn’t aware of this for my first season. With that gun I hit every duck or grouse flying left to right because I had built in lead to the right. But I missed everything going straight away or to the left. I discovered that it shot to the right while trying to finish off a wounded duck on the water and my shot kept splashing to the right of it. The choke was installed crooked throwing every shot to the right. I would have missed every tom I aimed at with that gun.

The other shot gun, an over and under, has a top barrel that hits one foot high at twenty yards. I like this for grouse and woodcock hunting because upland birds are usually rising targets. So I can keep the bird in sight above the muzzle and I have built in lead above the rising target. This is an advantage in upland bird hunting but it would send a turkey load right over a tom’s noggin. The point is that many shotguns don’t hit where they are aimed and you need to verify that your shot gun hits where you think it does to avoid missing that awesome strutter when he comes in.

Sight in your turkey gun by sitting on the ground with a solid backrest, such as a tree. This simulates turkey hunting and is how you will be shooting when your long beard shows up.