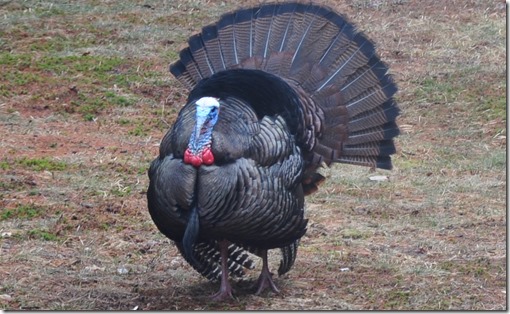 The first long beard I shot, many years ago, had a lot of hang ups. But with persistence and a bit of luck we overcame them together. He started out well, gobbling his innards out, on his way to my set up but at sixty yards he stopped in open hardwoods to strut and display. An hour later he was still hung up there. I quit calling because, being a novice, I thought I might have stopped him with a sour note on my mouth call. Finally he walked away through the hardwoods in search of another hen.

I kept track of him by making him gobble with my crow locator call and scrambled in a wide circle to get in front of him, hoping to try him again using my push pin yelper. I kept a little ridge between us to stay out of sight and set up in front of him. When I yelped on the call, he gobbled once but dallied en route to me. Finally I could hear his footsteps on the dry leaves but couldn’t see him below the crest of the ridge. He hung up there too. My best clucks, purrs and yelps on the push pin caller didn’t budge him or make him gobble again. I thought he might come in for two hens so I clucked on my mouth call. Instantly he gobbled and I saw his tail fan coming up over the rise. I shot when he broke and strut my first tom ever was flopping on the ground, free at last from all his hang ups.

I’ve since learned some reasons why toms hang up and what can be done to get them moving again, or better yet, avoid hang ups from the start. Keep in mind, a cautious tom is pokier than a snail with a limp so I don’t consider one hung up until it hasn’t moved from one spot in half an hour.

When a tom approaches the place he heard a hen call from, he fully expects to see a hen there and looks for a sign of responsiveness from her. If he doesn’t see her, he hangs up waiting for the hen to show herself.

In the case of my first tom, he could see my location and there was no hen. He wasn’t spooked by me or my calling or he would not have strutted there for an hour. He just wanted to see the hen make the next move. It didn’t happen and he walked.

By total beginners luck I did the right thing – I set up on him again from a spot he couldn’t see until he stepped into range. The ridge blocked his line of sight to me so he had to crest it to see the hen he heard calling. By then he was in range and mine.

Keep your tom coming by choosing your set up carefully. Use wrinkles in the terrain to set up in a spot he can’t see until he’s within your effective range. If you set up poorly and he hangs up in sight, quit calling, let him walk and try again from a better location.

Decoys, visible from a distance, may entice a jake or a hot two year old to come into range but an experienced long beard often hangs up with decoys because he expects the hen to come the rest of the way to him once he has a sight line to her. To keep your tom walking and talking set up decoys in a spot he can’t see until he’s close enough for a shot. An added bonus of this tactic is that he will be focussed on the dekes and not you when its time to shoot.

In field situations or level ground where you can’t use the terrain to set up out of sight, use a jake or strutting tom decoy with hen decoys to over come his natural caution with his other instincts; dominance and jealousy.