Trail cameras aren’t just for scouting deer.  You can keep tabs on turkeys with them too. 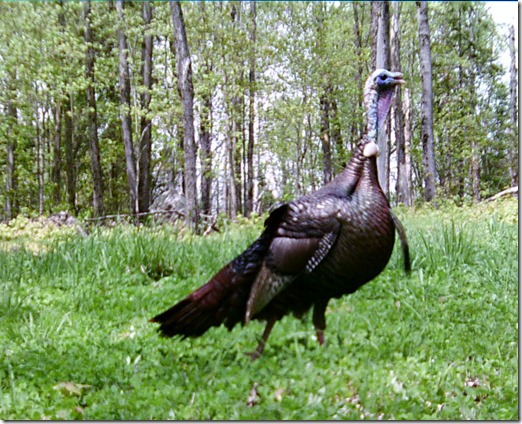 I leave my cameras in the woods after turkey season.  Two days after the season was over, this beard swinging tom strolled by.  It was great to know he had outwitted the hunters, passed on his genetic traits and given me a chance to duel it out with him or others like him for seasons to come.

To get the most out of  trail cameras for turkeys set them about knee high.  Cameras don’t  spook turkeys, so you can put them right on a trail looking down the trail.  Don’t aim them across the trail or the turkey will be out of the frame before the camera shoots. Other great spots to set up cameras are on dusting sites, food plots, breaks in fences and near roost trees.

If your camera has plot watch or time lapse mode, meaning it can be set to take a picture every half hour of field, set it up high to cover the whole field to find out where the tom enters the field.  Then move the camera to his entry point and set it back to normal or trail mode to get some great close ups of him when he walks by.

Trail cameras are a great hobby by themselves apart from hunting.  They give me intriguing peeks at life in the woods and raise my awareness of wildlife nearby that I would never see otherwise. It’s always open season for “camera trapping” so I have a reason to get out in the woods all year to set up cameras and check them every few weeks. Then I have the excitement of sliding the the SD card from the camera into the computer to see what’s been going on in the wild kingdom nearby. Its a thrill and a surprise every time to see the pictures from this stand alone hobby. 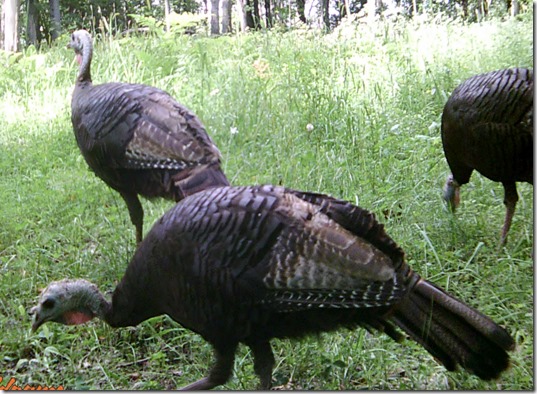