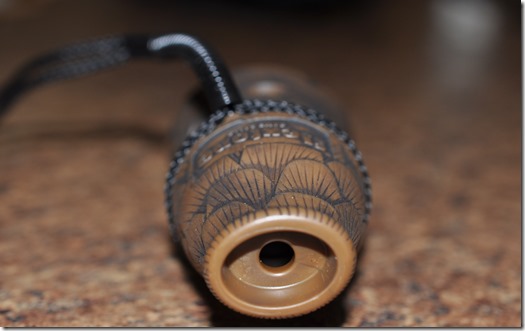 I’m not a sucker for every new turkey call on the market but Flextone’s Cut’n Thunder tube call intrigued me enough to get one and try it in the field last season.

I wanted a loud tube call for hunting big expanses of woods.  I like to sneak along and call over ridges and down valleys to get a tom to gobble before he is aware of me, so it takes a loud call to trigger a gobble way out there. I put one on my lanyard and right away found out something I liked.  Since it has a soft body it never clinks against my gun or other gear as hard plastic will do.

I could use it with one hand also, which you can’t do with a slate call or box call. So when walking and calling I didn’t have to get my peg and slate out of my vest and put them away every time I wanted  to call . The Cut’n Thunder was right there on the lanyard when I wanted it. Little things mean a lot after hours of hunting.

I found it excelled at loud yelps but the yelp was single tone, not the high to low “keyoke” sound of a hen yelp. This was easily fixed by squeezing shut the flexible megaphone shaped end of the call as I yelped. I start the yelp with hand open and squeeze it shut quickly  around the call  to lower the tone for the second note of the yelp. That’s the benefit of soft bodied call – you can squeeze it to get the tone or inflection you want.

It makes outstanding cutts and fighting purrs.  This is the call I would use to draw in a tom with a staged turkey fight because of the loud cutts and guttural fighting purrs.  This call can be held in your teeth to purr on while you simultaneously grind out fighting purrs on a slate call to sound like two toms mixing it up. I often wondered if such loud calls spooked toms or turned them off.  There wasn’t a lot of gobbling in my neck of the woods last season but the the Cut’n Thunder did fire up a tom for me rather than spook him.

I would use it as a searching call to cover a big area and trigger a gobble.  If I knew there was a tom nearby or if a distant tom gobbled and started coming in I would go to a  mouth call or pot call because they make better low volume calls for finesse calling at close range.

One thing I didn’t like was the small opening in the mouth piece for the air to blow through. The small opening made it hard to blow enough air into it to get the proper sound easily.  It was hard work to operate it.  You can see how small the opening is in the picture above. I’m a tinkerer so I got out a knife and voided my warranty.  I cut away the soft plastic around the hole to enlarge it and make the call do what I want it to to do. With that tweak it will be on my lanyard again next season. Below is a picture of my modified (hacked) Flextone call.

The call also comes apart easily in two pieces for cleaning or to replace the latex diaphragm in it.

If you want to learn how to use a tube call its all in my ebook “How to hunt the wild Turkey” Get details on the book page.

An added advantage to a tube call is that not a lot of hunters use it, so a pressured tom that’s be yelped at a lot won’t pick you off as a hunter. 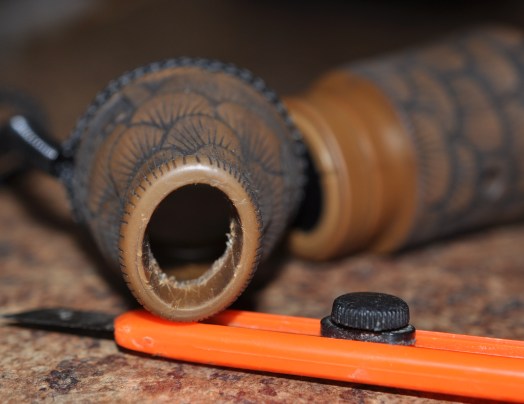