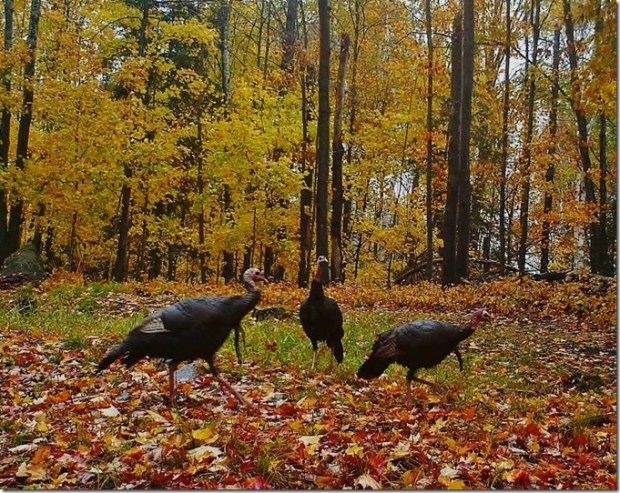 Forget your spring tom strategies. It’s a new game in the fall.

Turkeys play by a different set of rules in the autumn hardwoods, so you need to change your playbook. If you want a fine turkey dinner from the wild this fall, use these tactics to help put something special on the platter.

By mid-October, most wild turkeys will have joined one of four types of flocks, depending on their age and sex. Toms hang together in small bachelor groups, while one-and-a-half-year-old jakes form gangs to head out adventuring on their own. Hens and poults, meanwhile, make up the third and largest type of turkey flock. Hens without poults form the fourth type of flock.

Flocks are easy to find when they’re feeding on waste grain in fields. But if their presence isn’t so obvious, get into the woods with a shotgun or .22 for some small-game hunting before turkey season opens and look for turkey scratchings on the forest floor. A flock of turkeys needs a lot of food, and it can really rip up the carpet.  In dry weather, scratchings a few hours old will still have moist, bare soil.

Flocks in the big woods may range over thousands of acres in the fall as they forage, and may not return to the same spot for days. Farm country flocks may travel the same route each day like clockwork to a prime food source from their roost.  If you find the roost and the food and a good place to set up and wait for them along the route your going to need some cranberry sauce.

They’ll poke along grassy laneways and field edges looking for grasshoppers, cruise ridges for acorns and scour the scrub for berries and seeds. Walk slowly and listen carefully while you scout—you may hear some scratching in the leaves, or clucks. And always be sure to carefully peek over ridges and around corners along the trail if you hope to find the birds before they spot you.

A simple way to find out if there are turkeys in a bush is to be there before dawn. While it’s still dark, get to a high spot where you can hear a good distance and listen for birds coming off the roost. They’ll make quite a racket, yelping while still on the roost to re-establish contact after a night of separation, then cackling as they fly down, their wing beats carrying through the still morning air like thunder. And once on the ground, they’ll mill around clucking.

With a flock of hens and poults, the boss hen may yelp to assert her dominance and call the flock together before it marches off for breakfast. If it’s a flock of toms, the wing beats will be slower and heavier. Tom clucks also have a lower pitch than a hen’s, as do their slower yelps. The boss tom may even gobble to remind his buddies he’s in charge, while a jake might try a broken gobble. It’s important to know whether the flock you’re hunting is made up of toms or hens, because that will determine how you call to them.

If you find a roost, hunt it the same way as you would in the spring. For starters, watch the roost from a distance in the evening to learn which side the birds approach it from. Before dawn, set up on that same side, as the birds will likely head back that way in the morning. Try to get to within 50 yards of the roost, and when you hear the birds call at first light, mimic their calls—cluck for cluck, yelp for yelp—getting louder and more aggressive with each exchange. Act like an upstart challenging the boss bird, and it may come looking for you. If the birds head off in another direction, make a big circle to get in front of them and begin calling quietly again. Always call from where turkeys are headed, not from where they’ve been, and you’ll be surprised at how good of a caller you are.

Fall toms are not the same hen chasers they were in the spring, and they ignore hen talk. Instead, they’re all about improving their place on the social ladder. To call in gobblers, use tom yelps and clucks to fire up their curiosity, making them think you’re a new bird looking to fit in. Usually, they’ll sneak in quietly to check out your calls. If a bird answers back, however, it will likely be a dominant tom. Throw his own calls right back at him, loud and proud, and you may incite him to charge in looking for a fight.

A mock fight with aggravated purrs, wing beats and thrashing in the leaves can also incite toms and jakes to come in. Jakes often fight among themselves, and they’re always eager to watch a dust up. Being careless with curiosity, they’re usually the first customers to a mock fight. 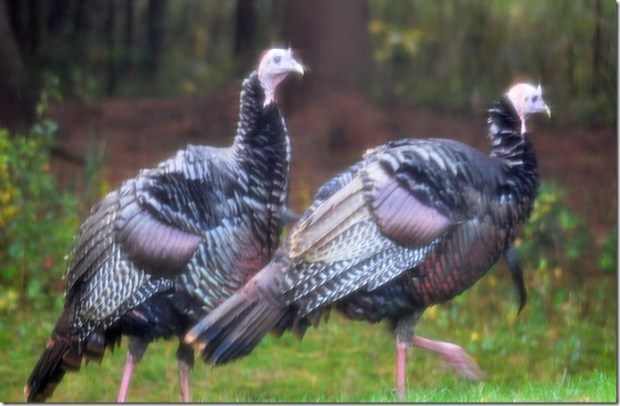 To call hens, use the same hen  vocalizations you use in the spring  to call toms, along with the addition  of the kee kee run, and lost call.

To call in toms and jakes use their own lingo.  Toms and jakes also yelp, cluck, cutt and purr,  but their calls are generally lower and slower than hen talk. You need to accurately match the lower tone and slower rhythm of a fall tom—he’s no longer the hormone driven love bird of the spring hunt and therefore far less likely to overlook poor calling.

The e-book  “How to Hunt the Wild Turkey” describes how to make all the calls you need  to hunt fall toms or hens.