Any ruckus in a flock of turkeys is usually caused by the pecking order or social hierarchy within the flock.  Each bird in the flock has a social status or standing in the flock.  This is true of hen flocks, flocks of toms and flocks of jakes. 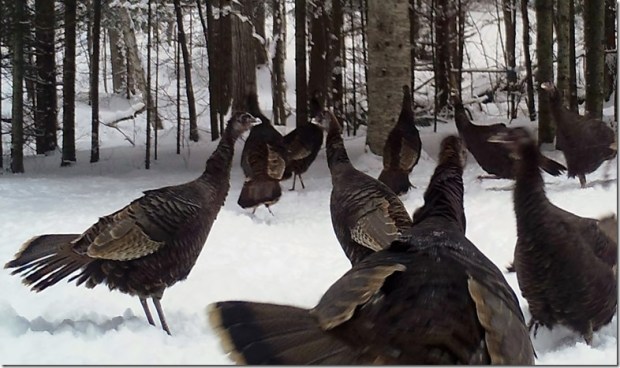 Top of the pecking order birds rush at lesser birds if they get too close and peck or kick them to exert their dominance in the flock.  Then, the lesser bird then might rush at a bird lower than itself to express its own level of dominance. When a pair of hens both want to be dominant, a fight erupts to sort out who the boss hen really is.  The same process happens in flocks of toms and flocks of jakes.

Sorting out the pecking order is a year round issue and is just as strong as the spring mating instinct.  During the spring hunt for toms some toms are as much interested in exerting their dominance over other toms as they are in mating.  You may not be able to entice a dominant tom away from a hen with hen calls but he might come to tom yelps and clucks to sort out the intruder tom is in his territory.

Or you may be able to call in the boss hen by challenging her place in the pecking order with excited cutting and yelping.  If she comes in, any tom with her will follow along.

In the fall their is no breeding urge but the pecking order challenge, with excited tom yelping and cutting, is a good call if you hope to bag a mature tom. If you hear a gobble in response to your calls and you want to harvest the boss tom, then gobble back. If you just want any tom, not the boss bird, then gobbling might intimidate less dominant toms and make them avoid you.

Pecking order challenges work in all hunting seasons because the pecking order is a daily issue for every turkey.

See the pecking order at work in this trail camera video of a hen flock.  In it, a bearded hen, approaching from the left, gets too close to the boss hen who then flies at the bearded hen and runs her off. The bearded hen then takes a run at a bird lower than herself.