Hyper wary toms and late season toms have been yelped at a lot by hunters.  Loud yelping can be an instant turn off to pressured birds. Also, hens yelp on their way to a tom, so by yelping you may be telling the tom you are coming to him, so he stands his ground waiting.  When you never show up he leaves in search of another hen.

Once a tom has gobbled to your yelps back off loud calling.  Switch to soft clucks, purrs and non- vocal calls, to make him come and find you.

Use non-vocal calls like wing flapping and scratching on the ground. Turkeys flap their wings to get the kinks out of them periodically throughout the day. They are always scratching on the ground to uncover food. These authentic sounds are great to bring in wary toms that hang up just out of sight because they expect the hen to come the rest of the way to them. They instil confidence that it really is a hen they hear over that crest or around the bend in the trail, but she’s not interested enough to move, so he will have to take the next step and go all the way to her. 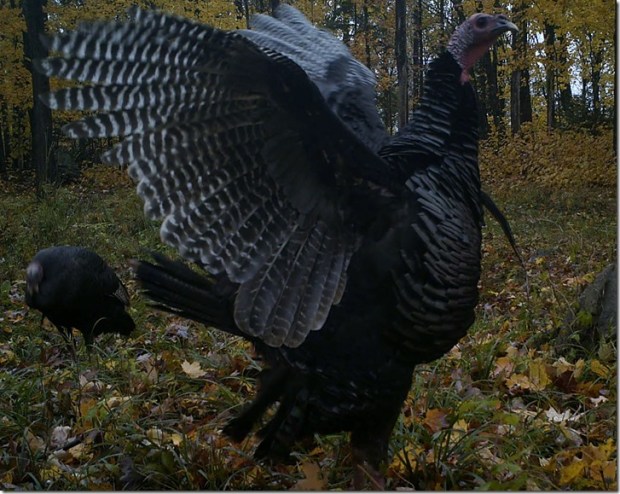 Wing flapping can be simulated by beating a turkey wing in the air quickly or by beating your hat on your thigh.  Just be sure you can’t be seen when you do it.  Take a good look around to be sure a sneaky tom is not coming in on your blind side, before you flap. Then flap with a fast rhythm.

A lot of animals scratch in the leaves for food. You have seen deer and squirrels doing it. But turkeys do it with a distinct rhythm and pattern that only they make.  And they recognize that rhythm as another turkey.  You need to duplicate that rhythm to call  to them effectively with scratching.

Below is a video of a jake scratching in the snow.  He scratches first with one foot, then twice with the other foot, then he switches back to first foot and scratches once more.  This produces a distinct four note rhythm that sounds like scratch, pause, scratch scratch, small pause, long scratch.  It’s a snappy rhythm.

You can hear the rhythm as he scratches.  That is  the sound you need to duplicate when you scratch with your fingers in the leaves to call that crafty old tom over the last rise into sight and into range. Practice with your fingers on the desk or table as you watch the video so you can get that rhythm in your head for turkey season .