Look at the size of this turkey’s eye. With eyes this big on both sides of it’s head, it can see in all directions at once without turning its head, except directly behind it. If it turns its head a bit it’s got 360 degree coverage.  Hardly anything that moves goes unseen to a wild turkey. In a flock, there are even more pairs of laser sharp eyes on the look for movement, so the chances of them seeing something they don’t like is multiplied. 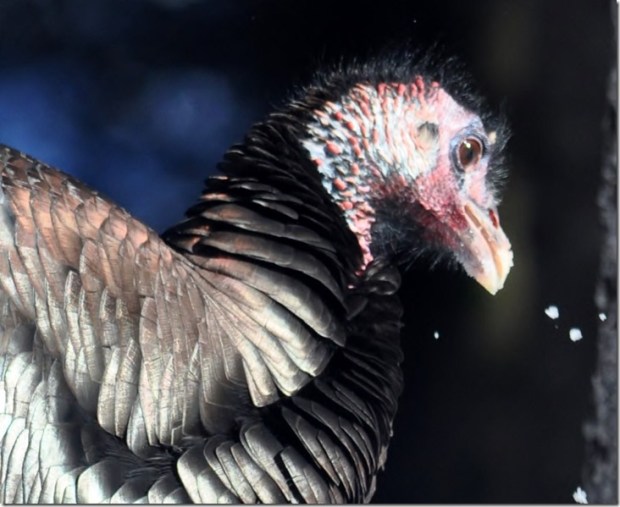 Now look at the turkey’s ear just behind the eye.  It’s nearly as big as the eye and always alert to any sound. Great eye sight and good hearing are why turkey hunters need to be stealthy when they enter the turkey woods.

Turkey hunters will never know how many toms they have spooked out of their area by being seen or heard when they didn’t know the tom was around. Whether you are walking to your set up or running and gunning, make it a habit to go slowly without snapping twigs and scraping on brush.  Test each foot fall for twigs before you put your full weight down. If you feel a twig place your foot somewhere else.  This slows you down but it makes you sound more like a turkey or a deer as you move along.  Walking slowly with minimal noise makes you less intrusive. You may even hear or see turkeys before they hear you, which tips the odds in your favour.

Pressured long beards hear the pick up trucks pull into the parking spot and the hunters get out and walk into woods.  They know the drill and quietly move off. If you can enter the woods quietly from a different place than than the other guys, even if a longer walk, it will be worth the effort.

To be sure you won’t make any  unnatural sounds, like calls clunking together or squawking in you pocket, put your vest on at home and jump up and own three times.  If anything rattles, rustles, squeaks or squawks readjust the guilty gear to silence it.

Bumbling around in the woods is the surest way to bump birds or spook them off before you even know they are around. It also tips them off to your intentions and educates them to your calls.  Keep the pressure low on this hyper wary quarry.  Get stealthy.